Domain of One’s Own Initiative 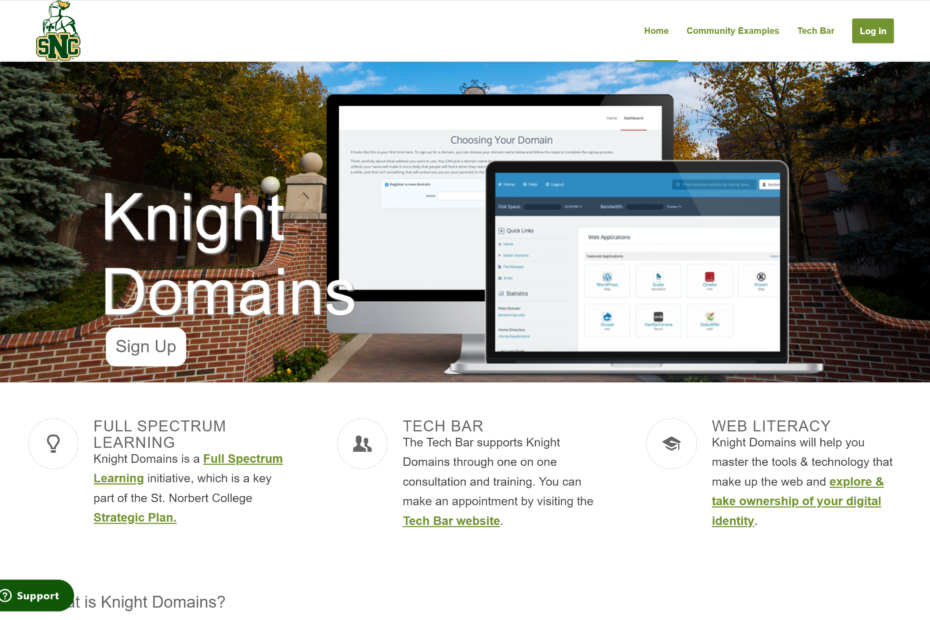 Information was adapted from our old knight.domains blog originally written by Autumm Caines and Taylor Jadin and later revised by Annicka Rabida

What is Domain of One’s Own?

Domain of One’s Own (sometimes abbreviated as DoOO) is a global education initiative that empowers students, staff, and faculty at institutions of higher learning to take responsibility for a little piece of the internet that they can call their own. This entails registering a domain name and working as an administrator in a bit of shared hosting space. It is all at once a very simple idea and a complex one.

You may be thinking – “Working as an administrator on shared hosting space! That sounds too technical!”. Well, is not as hard as you may think but it does upset the idea of “user friendly”. DoOO is not as simple as signing up for some free service but your space will never be subjected to someone else’s advertising and all that you learn in building that space can be used to move your content if you ever decide to change names or hosting partners.

This idea of ownership is at the center of DoOO. At University of Mary Washington, where DoOO was started, this is tied to Virginia Woolf’s “A Room of One’s Own” where Woolf argues that a woman needs a room of her own and money if she is to write fiction. Domain of One’s Own gives people a space on the public internet that they can call their own – how does this relate? Audrey Watters writes:

Intellectual productivity on the Web looks a bit different, no doubt, than it did at Woolf’s writing desk. But there remains this notion, deeply embedded in Domain of One’s Own, that it is important to have one’s own space in order to develop one’s ideas and one’s craft. It’s important that learners have control over their work — their content and their data.

But what is DoOO at St. Norbert College?

Well, we are just getting started with domains here at St. Norbert. In Fall of 2017 and Spring of 2018 we ran several pilot projects by issuing coupon codes to students, faculty, and staff who were involved in those projects; these included several classes and our own Tech Bar. These coupon codes only gave hosting and domain registration for one year and were not centrally managed in any way.

In Summer of 2018 we set up a centralized DoOO offering at the college and we call it Knight Domains. With this new offering anyone with an SNC email can sign up for domain hosting and a subdomain name for free. While anyone can sign up we are not advocating that everyone does, just yet. Deciding to have a public voice and sorting out the nuances of public discourse is something that should not be taken lightly. As we build a campus culture that considers these nuances consultation, collaboration, deliberation, and support around them are being offering by specific classes, programs, departments, and at our Tech Bar.

As we move into the Summer of 2020, Knight.Domains has now been available for faculty, staff, and students for almost two years. We started out with 500 licenses through Reclaim Hosting but have upgraded to 1,000 in Spring of 2020. There are now 543 total signups through Knight.Domains. Below is the progression of the signups over the two years. The notable spikes are at the beginning of each semester.